Honored for His Sacrifice While Serving on DeTour Reef Light 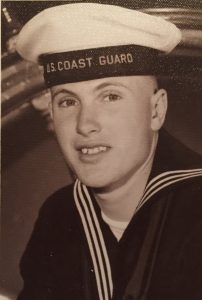 On a rainy Thursday, August 17, 2017, citizens of DeTour Village and Drummond Island joined with the crews of the Coast Guard Cutter Buckthorn and Aids to Navigation Team of the US Coast Guard, Sector Sault Sainte Marie to honor Don Ashley, Jr. who died while serving on the DeTour Reef Light on March 30, 1971. Also attending were his brother, Michael Ashley, his sister, Linda Ashley VandenHeuvel and their spouses from Green Bay, Wisconsin.

In the morning the CGC BUCKTHORN provided tours of the Cutter at the DeTour Village Ferry Dock before the memorial. A helicopter fly over by the airmen of the Sector Sault Sainte Marie Air Station was planned, but the weather did not cooperate.

DeTour Reef Light Preservation Society (DRLPS) Joe Henne opened the ceremony by sharing the story of Seaman Ashley’s death. He is the only member of the U.S. Coast Guard to lose their life while stationed at the DeTour Reef Light.

Capt. Marko Broz, Commander, Coast Guard Sector Sault Ste. Marie said, “The Coast Guard men and women assembled today continue to stand the watch that Don so bravely stood nearly 50 years ago.” Broz said, “Michael and Susan, your brother died in the service of our Nation and while doing his best to protect those mariners who ply these beautiful, but unforgiving waters. We are proud to follow in his footsteps and strive to uphold the standards he set for us.”

The DeTour-Drummond Community Choir also attended and sang the National Anthem and a powerful rendition of the Coast Guard anthem, “Semper Paratus”.

Barbara Kurciewicz, the widow of Marvin Kurciewicz who was on the Light when the tragedy occurred, spoke with pride of her husband’s twenty-year military service.

Michael Ashley described his brother’s death:
“The winter of 1970-71 was extremely cold, producing significant ice which led to a late opening of the shipping season. The United States Coast Guard (USCG) commander was anxious to get the system ‘up and running’ as the weather had caused the opening to be ‘delayed twice already’.

“Three coastguardsmen departed DeTour Village Harbor in a 16-foot tender with limited supplies. The ice was breaking up, but they reached their destination safely, scaled the ladder 20+ feet to the platform, and chipped the winter accumulation of ice off the entry door to the tower. They entered the structure and started the power generator to initiate another season of manning and running the DeTour Reef Light.

“Don Ashley volunteered to go back to DeTour Harbor by himself for more supplies and to pick up another crewmember. On his way to shore, the tender was caught between ice flows and capsized. Don was thrown into the water. His two fellow USCG mates heard his distress call but had no rescue equipment available. They watched him make progress towards the lighthouse while swimming for about 20 minutes. After a large wave wash over him Don never resurfaced.

“The Drummond Island Ferry answered the emergency call to no avail. A USCG helicopter was dispatched with divers, but it was judged too dangerous to search for his body at that time due to ‘conditions’. Because of an ongoing stretch of harsh weather and significant ice conditions, there was no river traffic for the next 14 days.

After the ceremony, Mike Ashley shared, “It’s amazing. There are some really nice people here. Forty-six years later they’re doing this for him, there was not much done back in 1971. It’s very touching and very emotional. Since his body wasn’t recovered the lighthouse out there is like a memorial to me, like one you see in the cemetery.” 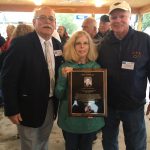 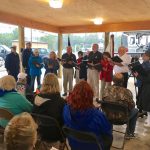