Gateway to the Superior – DVD 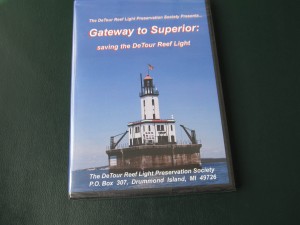 Gateway to the Superior – Saving the DeTour Reef Light

The DVD has been re-released as a 2 disc DVD set!

The 83-foot historic structure, located a mile off-shore on a concrete crib, warns ships of a dangerous reef at the entrance to DeTour Passage at the mouth of the St. Mary’s River which connects Lake Huron to Lake Superior. Restored by the DRLPS in 2004, it proudly sits between the two communities of DeTour Village and Drummond Island. The Light is an important part of the rich maritime history of the region.

Video and photo-graphic memories recorded during three of our volunteer keeper weekends are on the DVD. Videographer Byron Goggin, of Wild Weekend TV was one of the keepers and the DRLPS is pleased to present his fascinating video of weekend lighthouse keeping on DeTour Reef. Slide shows by volunteer keepers Bob McSweeney and Gordon Snyder that record their experiences as Light Keeper are also part of the DVD.

“The film is uniquely educational and entertaining,” said Dave Bardsley, DRLPS Past President and director of the project. “It chronicles the history and restoration of an offshore lighthouse located in northern Lake Huron in Michigan’s Upper Peninsula.”

VISA, Mastercard and Discover are accepted. For additional information email memorabilia@drlps.com or call 906-493-6609.